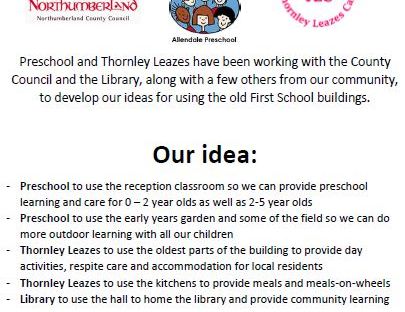 Allendale Old School
Background
Allendale Preschool is a charity, set up in the 1970s, to provide childcare and early years learning for the families of the Allen Valleys. The trustees of the charity are mostly parents of children attending Preschool. All income comes directly from the fees for the children attending and from fundraising.
In 2009, after a long period of fundraising and sub-standard accommodation, Preschool moved into a purpose built building attached to the former Allendale First School and rented from the County Council. In 2013, Allendale First School had become a primary school and moved to the former middle school site. The Preschool building remained as part of the old first school estate and the County Council remain Preschool’s landlord.
At the same time, the charity’s trustees took Preschool through some big changes, increasing the amount of outdoor activities the children do and taking on new, highly qualified…

View all posts by Yvonne Conchie